Rock Rapids, IA (May 6, 2014) – Ignite Christian Academy senior Hayden Pilgrim has been awarded an Army Reserve Officer Training Corps (ROTC) scholarship in the amount of $44,000 through the University of North Georgia. 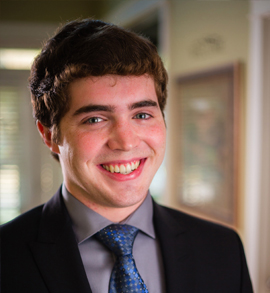 Knowing he wanted to join the army, the senior from the Dallas-Acworth area in Georgia started studying through ICA's accredited online learning program in 2010.

"I chose Ignite Christian Academy instead of traditional homeschooling as I knew I wanted a career in the U.S. Army, and the accreditation it offered would help on my path to attend a state college and receive an ROTC scholarship," Pilgrim said.

While researching career options, Pilgrim discovered both the Army ROTC program and the University of North Georgia, a designated state leadership institution and one of six Senior Military Colleges in the country. Upon learning that UNG has one of the top Corp of Cadets programs in the nation, Pilgrim decided to apply.

"Ignite Christian Academy was quite helpful in my application to UNG and for the ROTC scholarship," Pilgrim said. "Through their accreditation, my education was given validity with the Army."

During his time with ICA, Pilgrim has enjoyed learning from teachers who live in a different region of the United States. Pilgrim also said he appreciates the freedom ICA's online learning gave him to work ahead and advance at his own pace.

Distributed over the course of three years, Pilgrim's Army ROTC scholarship provides a monthly stipend and helps cover expenses associated with obtaining an education through UNG. Upon graduating from the university, scholarship recipients serve as commissioned second lieutenants in the Regular Army for four years.

"I look forward to learning more about Military Science and leadership at the University of North Georgia," Pilgrim said. "I have been involved with the Boy Scouts of America for seven years, and during that time I have held many leadership positions and earned the rank of Eagle Scout, but there is still more I can learn at UNG to improve as a leader. I feel very blessed to have…the opportunity to receive higher education, serve my country to the best of my ability, and pursue what I feel led by God to do."

Find the best fit for your student's needs.

❯ Have Us Call You
❯ Request More Information
❯ Your Payment Center

“As a parent of a student at Ignite Christian Academy, we are very pleased with the program. The program has a challenging curriculum, but at the same time, my son is relaxed, and learning is much more fun to him.”

HOW CAN WE HELP?